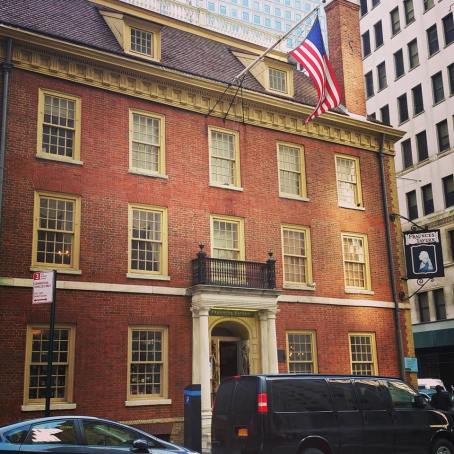 Fraunces Tavern is the oldest bar in the oldest building in New York City. It was built as a residence in 1719 by Stephen DeLancey, using imported Dutch bricks, and subsequently converted into a tavern in 1762 by Samuel Fraunces. The place has been humming (and sometimes blasting) with activity ever since — and boy, if those walls could talk. Actually they probably do, as the place is said to be haunted. The building was the meeting place for the secret Sons of Liberty group and took a cannonball hit from a British Royal Navy ship during the Revolutionary War. George Washington threw a farewell kegger for his troops here at the end of the war. Upstairs rooms were used as offices by the new republic’s Departments of Foreign Affairs, War and Treasury. An onsite museum gives you the lowdown.

The restaurant and bar sprawl through several low-slung, creaky-cozy rooms. A separate, clubby little whiskey bar is also tucked away in one of the side rooms and functions as the headquarters of the Fraunces Tavern Whiskey Society.

Pot pies, burgers, steaks and stews, washed down with fine whiskeys, Irish stouts and porters, are popular hearty fare here. This landmark tavern is a site on the American Whiskey Trail. Try the house whiskey punch for a great way to get in the revolutionary mood.

A lock of George Washington’s hair is on display in the tavern’s museum.

Get a glimpse inside NYC’s most historic bar in this CBS New York video snippet: