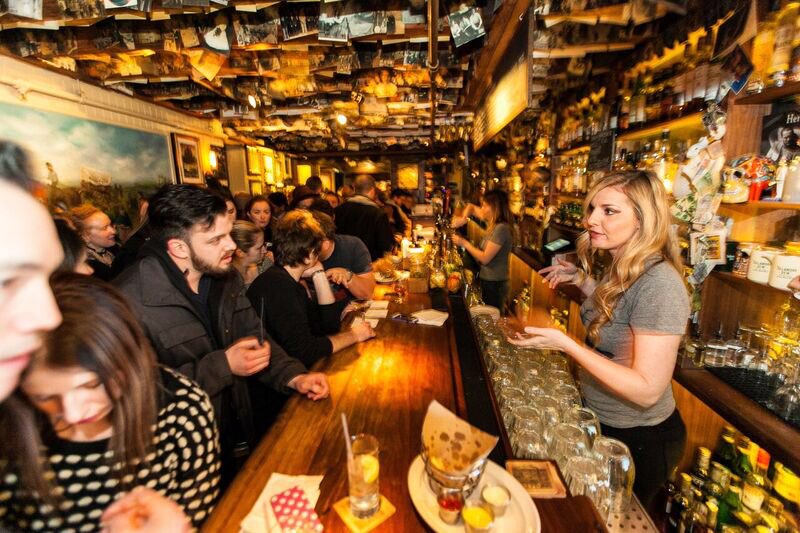 Once you visit the Dead Rabbit, you realize that all of the hype you’ve been hearing about the place is true. Here is a truly authentic Irish bar, created by two amiable gents from the auld sod, in a 188-year-old brownstone in Lower Manhattan’s Water Street. The first floor Tap Room is a sawdust-floored drinkery reminiscent of the rough and tumble waterfront bars frequented by German and Irish immigrant workers back in the day. In the 1850s, New York City gang members, like the Dead Rabbit gang’s honcho John Morrissey, brawled and hung out in the bars around here. Morrissey would later go on to become a NY State Senator and U.S. Congressman. The bar is named for his gang. Let’s just say that the neighborhood was quite a gritty and pugnacious place in those days.

The Tap Room serves craft beers plus highballs, punches, grogs and more than 100 different Irish whiskeys. It’s packed cheek to jowl at cocktail hour with nearby Wall Street office workers tossing a few back before heading home. Upstairs, the Parlor offers a more genteel atmosphere with piano music and table seating, very much like the elegant cocktail parlors on Lower Broadway that became the rage for the well-heeled in the mid-1800s. Here you’ll meet up with cocktail aficionados from around the world who have come to enjoy sipping some of the 72 historically accurate cocktails that helped the Dead Rabbit earn the title of Best Cocktail Bar in the World in 2015 and 2016. Even their beautifully written and designed cocktail menus have won awards — their latest edition is a noir-ish graphic novel.

Real Irish groceries, cheeses and hams are also for sale, making the place not only a true neighborhood bar where regulars are known by name, but also a bit of a real neighborhood grocery store, too.