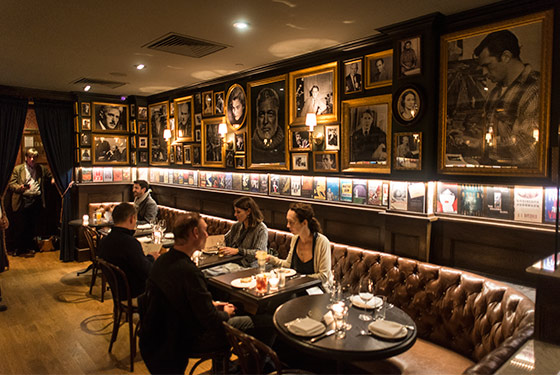 This once-tattered, dark and smoky West Village speakeasy had been a beloved haunt for poets, novelists, journalists and activists since it opened in 1922. Willa Cather, e.e. Cummings, Theodore Dreiser, William Faulkner, Ring Lardner, Edna St. Vincent Millay, Eugene O’Neill, John Dos Passos, and John Steinbeck are just the shortlist of literary greats who hung out here. The walls were crammed with their photos, along with framed book jackets from their published works. A chimney collapse closed the place in 2007. That was the sorrowful end of an era for this famous dive bar’s devoted clientele – locals and drop-ins from around the world.

I am happy to say that Chumley’s has since risen from the dead, reopening in 2016. But it’s under new ownership now — a shiny new version of its former threadbare, affable self, complete with precisely reproduced photo groupings displayed on the walls. While not a total Disneyfication of the original watering hole, the new Chumley’s will have to prove it deserves to carry on the traditions of its esteemed forebear and inspire new legends of its own.

The drinks are definitely classier these days with the help of 90 different whiskeys and intriguing cocktails like The Chaplin: Scotch, Fernet Branca, maple, and orange blossom water, chilled with a chocolate ice cube. The dinner menu is mouthwateringly upscale (Beef Tartare with Hazelnuts, Crispy Chicken al Cognac, Vanilla Ice Cream with Parsnip/Pistachio/Pine Honey), as compared to the dowdy bar grub served back in the day.

As per tradition, no exterior sign or blinking neon indicate Chumley’s location – just an unmarked heavy black door. The bar slang “86” originated here when an unruly guest was escorted out the Bedford St. door.

The Sip’s Kerry Drew gets inside the restored Chumley’s and chats with owner Alessandro Borgognone and gets a demo of some unique house cocktails from bar manager Jessica Dure in this video: